This journey originated in a disappointment. I have long wanted to visit the LACMA (Los Angeles County Museum of Art), and upon “careful” planning, I discovered that they offer free general admission on the first Tuesday of each month; for my itinerary, that is December 3rd, 2019. But upon arrival I found out that it’s actually the second Tuesday on which admission is free. In light dismay, I pulled out Google map which thankfully signaled to me some nearest museums, among which the Los Angeles Museum of the Holocaust (LAMOTH) interested me. This serendipitous encounter proved pleasantly surprising.

From the way I came, the architecture looked unassuming—it blends very well with its surroundings, which is a dog park with recreational spaces, a cheerful and light environment so to speak. How could something this heavy blend with such lightness, I wondered, as I was accidentally headed for the wheelchair entrance, a descending ramp gradually enclosed by two walls. This design reminded me of the famous memorial to the murdered Jews in Berlin, especially a similar sense of fear they both evoke. Visitors, as they gradually engage with the architecture, are subsumed by their surroundings and thus deprived of security by physical encroachment. Fortunately, the museum lobby itself is lit up by natural light and serves as a reassurance.

Whenever titled as “museum of the Holocaust,” such institutions will almost always be compared with Libeskind’s Jewish Museum in Berlin, the hallmark of an active and critical reflection on Jewish participation in the course of human history. (As I’ve yet to visit the equally renowned one in Washington DC, I will reserve my comments.) While the Jewish Museum Berlin sets a standard for museums of its kind, LAMOTH was able to provide distinctive perspectives. Remarkable was its emphasis on the connection pertinent to the city of Los Angeles—all exhibition rooms are marked by walls on which front pages of Los Angeles Times with Holocaust related news are presented. They showed a voice reflective of how Angelinos understood and responded to different stages of the atrocity. Other panels show how survivors of the Holocaust later made cultural and educational contributions to LA. The most stunning was the end of the exhibition, where a whole wall of screens featuring various survivors who live in LA telling about their journeys away from ancestral homelands. This excellent oral history project was sponsored by USC Shoah Foundation Institute for Visual History and Education, whose endeavors focused exclusively on massive killings in modern world history: Holocaust, the Nanjing Massacre, as well as the genocides in Armenia and Rwanda. Spreading out like branches to the same roots, the “Tree of Testimony” offers visitors a soothing assurance that public historians are actively coping with the aftermath of the Holocaust. It also demonstrated the degree to which the Holocaust haunted people so close around us. The Holocaust should serve as a constant reminder to the human race of how hatred and indifference could instigate the darkest side of humanity.

The curation flows almost chronologically, from the history of Jewish people since European antiquity to Nazi antisemitism, Wannsee Conference, and, eventually, establishment of ghettos, concentration camps, and death camps. The exhibition provides ample background knowledge for visitors to understand Jewish traditions and the people’s struggles and resistance during the Holocaust. It’s attentiveness to specifics is notable.

In the “History of the Jewish People” section, visitors are offered the opportunity to learn about the individual life of many illustrious Jewish figures, including Gustav Mahler, Franz Kafka, Sigmund Freud, and Theodor Adorno. The exhibition also presents specific cases of how Jewish victims were treated in some twenty cities in Eastern Europe. Later on, selected instances from particular concentration and death camps are shown on interactive screens, all of which will, within a fixed amount of time, display the number of victims at each camp simultaneously, welcoming all visitors to add up those astronomical figures themselves and thus feel the horror. The impact after learning the specificities of the Holocaust was immense. 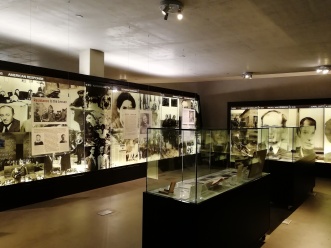 The physical dimension of the exhibition was also carefully designed to complement spiritual repercussions. The itinerary commences from a synopsis of Jewish history before 1930 as a linear downward journey to the depth—the actual savagery of the Holocaust. The exhibition corresponds to the physical descension by unveiling the worsening situation of the Jews under the Nazi regime. After taking a turn at “Life in Camps” section, the way gradually leads visitors back up to the lobby, displaying how survivors and their allies manifested strength in restoring justice. The complimentary audio guide, absolute key to the visit, exemplifies a similar effort to enhance one’s experience. The narrators are composed of a heterogenous group of people different in gender and age and even tone of narration, whose voices are entirely rid of the stereotypical vocality of a museum audio guide narrator: cold, well-spoken, and mechanic. No, I could tell that actual human beings were behind my headphones telling me the story, with human fallibility of utterance and various senses of indignation, shame, and sorrow. Some of them (I especially recalled a voice of an old lady telling about Heinrich Himmler and the Final Resolution) hold distinctive German-speaking accent, which led me to surmising that some narrators could have been actual participants of the Holocaust. This careful choice further elevates the message of humanity advocated by the museum: this is not simply a museum experience, but an active dialogue with the human race. 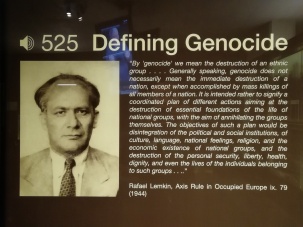 Beyond the Holocaust, the museum also actively connects its exhibition to the theme of genocide. Although it is not especially highlighted in the exhibition, the audio guide complements it by discoursing on the definition of genocide and four other comparable instances to the Holocaust: Armenia, Rwanda, Cambodia, and Darfur. Similar degrees of political fanaticism and intolerance were evident. Most shocking was the fact that unlike the Holocaust, not all other crimes of such sort are commonly recognized. Even today, political partisanship still stands in the way of a universal understanding of humanity.

Compared to the highlights, shortcomings are much easier to forgive and pass over. The most apparent of them concerns the audio guided just highly lauded above. Many of the audio entries are underdeveloped, some are mismatched, and some on similar or parallel topics are of different length and degree of specificity. Moreover, the exhibition lacks an alternative to following the audio guide: very few written placards and visual media other than photographs. Adding some musical pieces and video footage related to the Holocaust and Jewish cultural history could effectively diversify modes of engagement with the exhibition. 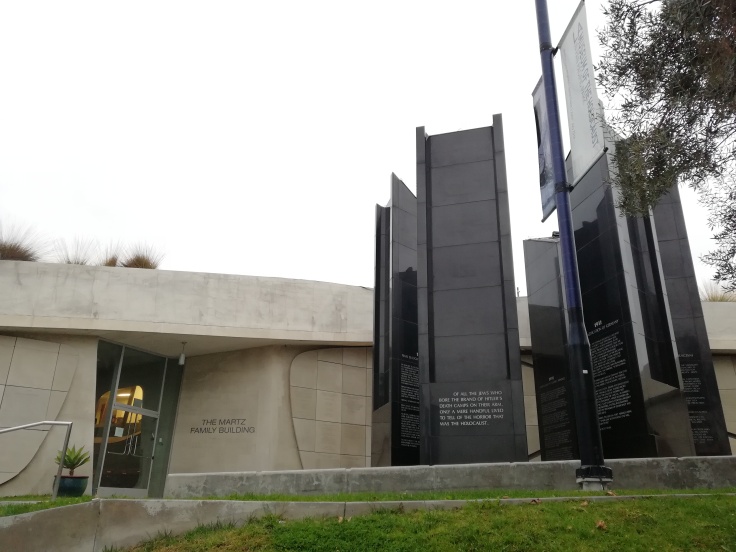 After all, it is a small museum, but so richly packed with stories and inspiring ideas that are bound to surprise careful and curious visitors. My 3-hour visit was very pleasant and thought provoking. While I was wandering around, I took informational notes as extensively, if not more, as I took reflective ones about its curation. The Los Angeles Museum of the Holocaust presents a powerful and coherent illustration of the difficulties and toiling of the Jewish people in the tumultuous 20th century world history. Beyond sharing historical sympathy, we should, following the call of the museum, learn from the past and actively engage with the present and the future in light of the past.